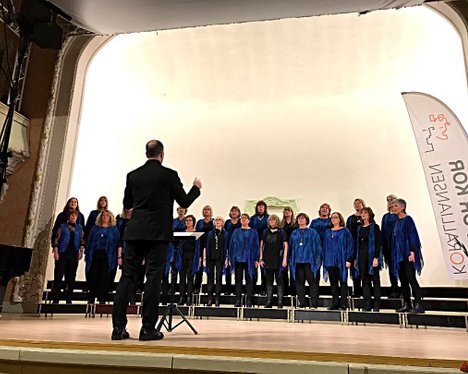 Everything is achievable – dreams are to be fulfilled….

Aquarius was founded on September 19th 2006 by Birgit Westgaard – our managing director, and Birgit Aune – our musical conductor.

Their goal was to gather creative, musically experienced and song-de-voted “girls” into

Today Aquarius counts 21 women from the city area of Askim – located in the south eastern part of Norway, one hour from Oslo.

None of us knew, in 2006, that Aquarius soon would perform for thousands of Queen fans in Europe performing Freddie Mercury’s  8 songs  Opus “Barcelona” and other Queen songs.

Our visions for a female choir were only to create a new ensemble, different from traditional mixed choirs, going our own way, picking up various songs and arranged, based on popular rhythmic music.  Some of our songs are special arranged just for Aquarius from our rhythmic mentors in Denmark, Tea Thyrre Sørensen and Peter Bom.

Aquarius simple philosophy is this: Singing is pleasure and joy; after a rehearsal on a rainy Tuesday eve, the laughter and good mood is back!

This is the recipe for success!  Join a Choir!

Birgit Aune was our musical conductor until autumn 2015.

From august 2015 Andre’ Bongard has been our musical conductor.

Aquarius is one of few amateur choirs doing this Queen show with full string orchestra, dancers, scenography and costumes, this show was a temporary climax, that led to performances later on in the Netherlands (Maassluis).during Queen day..

Even Adventures must come to an end; the following years the choir wanted to do something totally different. Singing a cappella rhythmic music, singing and perform on different sorts of stages and locations. The following period Aquarius performed both in churches and concert halls as well as in former factory buildings, tunnels and mines! The audience and the press / newspapers appreciated these concerts, this was something new and surprising, both the repertory, the difficulty of the songs and the sound of the choir learned from Marius Holth, and The Complete Vocal technique.

2013 – Concert in Askim Church, The Concert “The power of woman” during a local musical festival

2014 – Christmas concert in Askim, and concert in Aulaen in Fredrikstad with 7 other choirs

2015 -  ABBA concert together with students from Askim music, dancing and drama class.

2016 -  November 29th Christmas Concert at Moen School together with students

2018 – October 27th, Aquarius is the organizer of ChoirCup Østfold and Akershus, 350-400 singers invited